What We Should See

There's a big stink at the moment, about the AP's decision to publish a photo of a Marine in his last moments of life. I saw it come up as an aritcle about the stink, not the stink-causing article itself. So I went looking for the image, to see what all the stink was about, and I found this: 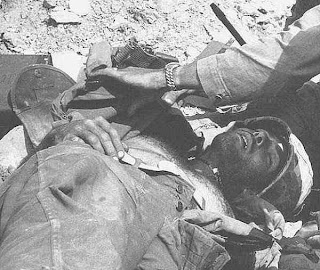 I thought, "Ah, that must be it. Then I read the caption: it said "dying Marine on the road to Seoul." That whapped me hard. I was looking for an image of a young man dying in one senseless, "modern" war, and as if one senseless war isn't enough, I get dragged all the way back to Korea. Amazing. 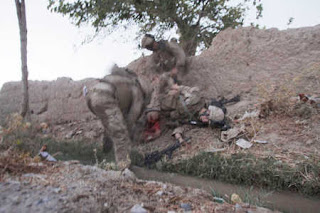 The young lad, one Lance Corporal Joshua Bernard, may he rest in peace, was hit by rocket shrapnel and died.

He died, some other soldiers died, and other people have died too. Women, children, civilians--ours and theirs, as if there's really any difference between one dead human and another, in terms of cost. Is an American life inherently worth more than an Iranian one, or an Afghani one? (hint: the answer is NO). All dead. Dead dead dead. Death is the price of war.

One of the things I remember about the Viet Nam
Posted by Deborah Addington at 12:38 PM

Go ahead. Say something.