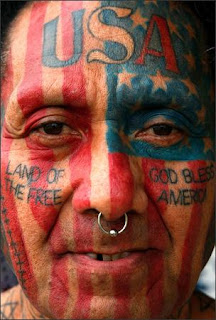 Ah, the 4th of July weekend approacheth, with all its attendant BBQs, patriotism and exploding devices. In America, We're ostensibly celebrating our Independence from those nasty English red-coated oppressors. It'd be swell if, while we remember and celebrate our extraction from the grips of a tyrant that we could look at the tyrant, at least long enough to go, "Ew. We don't ever want to become that!" IN order to overcome judgment, we often become that which we judge, so I guess it makes sense that we turned out the way we did. It's a great way to learn compassion--becoming what you judged.

Continental North America was a long way from England--a relatively tiny island that, at different points in history, managed to colonize & rule far larger portions of the known world. That's a high concentration of power in a small place. And not even the English were exempt from being picked on by the English. The Puritans weren't, to England, the way we remember them--stuffy, rigid, uptight. They were actually key in attempts to reform the Church, to return to a "pure" from of Christian worship. They were Conservative, sure, but in many ways they were a bastion against ongoing corruption in the Church. They got picked on a lot--for their clothes, the way they ate, the way they prayed, the way they lived in the world. They were so different that they clashed with the dominant culture; something had to give.

Back in the day, if you hated someplace enough and were willing to face the rigors of a sea journey you could go somewhere brand new, somewhere 'uninhabited' (read: already occupied by some heathen peoples but don't worry about them because God loves us better and we can take their stuff and turn them into Christians we'll never have to respect because they're a different color!) The Puritans thought this a fine idea, hopped on some boats and headed west. At last! The promise of freedom to live and worship as they chose!

But England came with the English. Eventually it came down to telling George (hmmmm...pondering the ratio of association of the name George with empirical tyranny...) to bugger off, that this land is my land and you can shove your taxes and the teabags they rode in on somewhere the sun doesn't shine.

You'd think we'd remember what it's like to be picked on. The Puritans came here because of it. They, in turn, picked on the indigenous people. As more folks arrived on this continent, more people got picked on and more groups for the picking on of people formed. And so it goes. If we don't heal the wounds that result form picking and being picked on, we become cruel, aggressive abusers ourselves, perpetuating the cycles of nastiness. Fortunately, other choices can be made.

This weekend, whether you're grillin, thrillin or chillin, take a second to find someone who gets picked on and do something kind for them--even if it's only a smile, a moment of pure & unconditional acceptance from a another being. That is, after all, some of the original ground for this country: a safe place for the picked on to go and just be who they are. Liberate yourself from ignorance and arrogance. Free yourself from the contrived, socially enforced demonizing and otherness that keeps us from compassionate understanding of one another. Become truly independent by learning who and what you truly are and refusing to settle for anything less.

Go ahead. Say something.